Here’s the final version of my new painting: Dreamscape No.1: Head and Heart Disconnect. It’s varnished and hanging in my computer room — I want to live with it for a while.

Even though it may seem creepy it’s not meant to be. It’s based on a recurring dream I had in the Fall of 2015. After having the dream 4 or 5 times and waking up rattled I looked up dream meanings: I found a passage about head and heart disconnect. The dream was supposed to signify that the dreamer was doing something that was in direct conflict with her beliefs and values. There was no head in the dream — just the functioning, decapitated body.

It’s funny how our brains work. Once I took the time to look up the meaning of the dream (which is something I RARELY do) it was obvious to me what my sleeping brain was trying to tell me.

Since then the dream has vanished — but it prompted me to make some adjustments in my life. And no, none of them involve decapitation 🙂 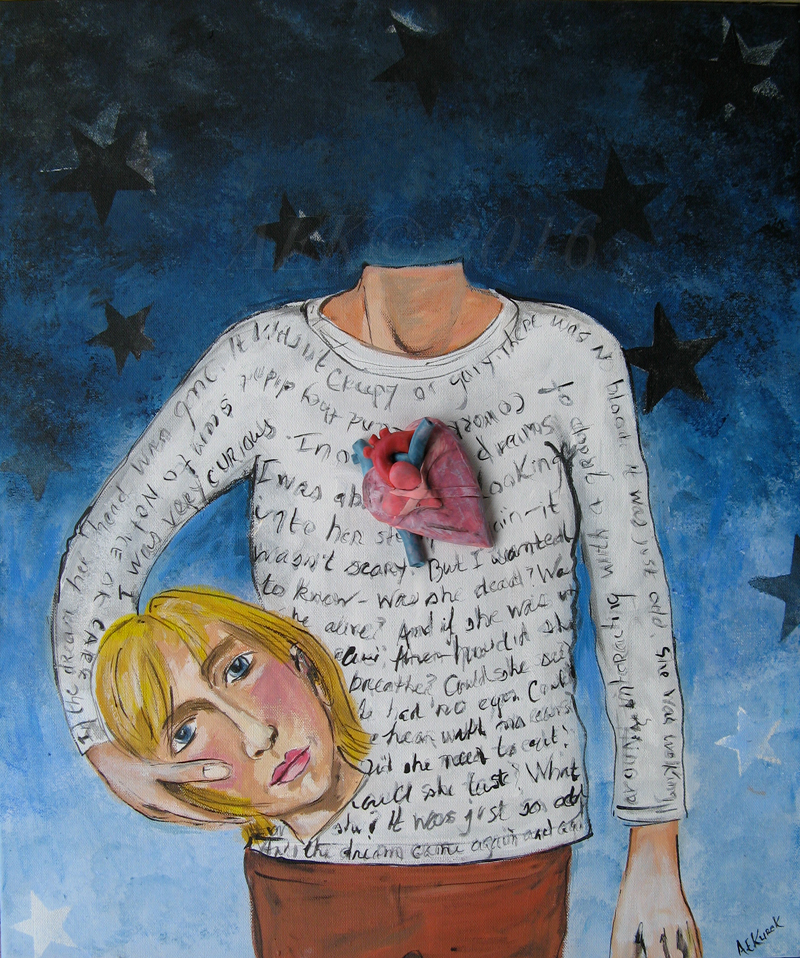 The story of the dream is written on her shirt; here’s what it says:

In the dream her head was gone. It wasn’t creepy or scary. There was no blood, it was just odd. She was walking around interacting with a group of co-workers and they didn’t seem to notice or care. I was very curious. In one of the dreams I was above her looking into her stump. Again – it wasn’t scary. But I wanted to know – was she dead? Was she alive? And if she was alive then how did she breathe? Could she see? She had no eyes. Could she hear without ears? Did she need to eat? Could she taste? What was she? It was just so odd. And the dream came again and again…..